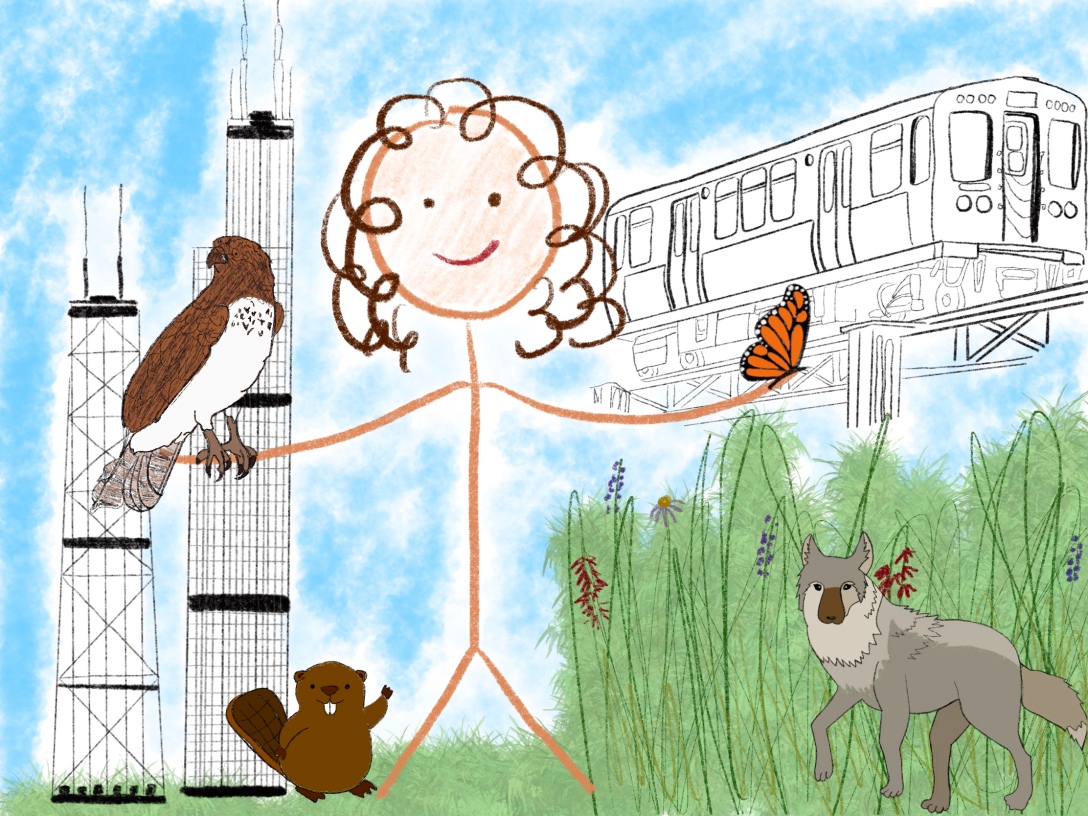 My most recent reading – related to the environment – led me to three books examining wildlife, both the exotic and the ubiquitous, in the urban landscape. As always, I’m interested in comparing perspectives from my native California and my current home of Chicago. What I found most interesting about these books was that they contradicted some of what I’ve taken to be essential truths about the urban environment, such as the need to eradicate invasive species – but we’ll get to that later. First, let’s talk about urban wildlife (the topic of part one) and why it’s worthy of consideration (part two).

The urban environment might seem inhospitable to anything other than humans, though it’s sometimes even inhospitable to us (think heat island effect). But there’s actually a lot of nature thriving alongside us, if you keep your eyes open.

Night on Earth, a Netflix series that reveals animal habits at night in different ecosystems, devotes one episode to cities (“…the most unnatural places on earth…hostile to wildlife, but at night it’s a different story.”). In the episode a herd of elephants slips through a town that bisects their ancient migration route; leopards stalk the streets in Mumbai, India; and a troupe of 700 macaques overrun the streets in Lopburi, Thailand.

While Chicago doesn’t boast such exotic species as elephants, leopards, or monkeys, it is home to one animal not often associated with the urban: coyotes. Gavin Van Horn’s The Way of Coyote centers them around a discussion of wildlife in the city. And according to Van Horn, “…coyotes are not just on the outermost edges of the city. They are in our city center. Coyotes are willingly moving to Chicago.” Surviving, and thriving, in the city center because of their “…behavioral plasticity, meaning they are adept at altering their behaviors to fit their environmental contexts,” something I’ll explore further in a future post.

I’ve never seen a coyote in Chicago, and it’s unlikely I ever will, given their propensity for staying out of sight (though I did once find a bat in the city). However, I rarely leave my apartment without bumping into the plants and animals featured in Nathaniel Johnson’s The Unseen City: squirrels, pigeons, snails, weeds, etc. found in his home of San Francisco. These creatures are so commonplace (ignored at best, reviled at worst) it’s hard to imagine why anyone would take an interest in them.

But as Johnson points out, “disgust is not such a bad place to begin an inquiry.” Part of opening ourselves up to wildlife in cities is acknowledging that it’s not all going to be pretty. Johnson says nature “can be grotesque, it can be cruel, and it can be comical. If humans hope to achieve a more harmonious relationship with the natural world, we will have to see it in full: breathtaking, dirty, and inspiring, and annoying all at the same time.” Yet, when living in a city, can we say we are living in the natural world?

What initially struck me about these books was how much the authors began by justifying their interest in urban ecology. Each author wrestles with the anticipated skepticism that their work studying coyotes in Chicago or squirrels in San Francisco is just as worthy as going to remote regions of the Amazon Rainforest to see if there’s anything left we haven’t found.

Because it’s common to equate wildlife with vast open spaces far removed from human influence, human-dominated spaces like cities don’t even come to mind. But as Menno Schilthuizen points out in When Darwin Comes to Town, “…when talking about nature, why do we always implicitly or explicitly factor humans out of the equation?” It’s easy to disparage human impacts on the environment. But if we continue to set ourselves apart, our detachment from the natural world could lead to continued exploitation and plunder. Bringing ourselves back into the equation, even in cities, could help with many of the climate impacts we’re facing today.

Considering how many of us live in cities (68% of the world’s population by 2050 according to the UN), we’d better start thinking of ways to coexist with and even encourage other species. After all, for many, what we encounter in the city is our only access to nature. Stay tuned for part two, where I’ll look at why studying our urban ecosystem is a worthwhile endeavor.

I believe growing up in California makes one especially conscious of the environment, with an overabundance of natural spaces and places at our fingertips. This means the environment has always been an underlying love and concern of mine. As a newer resident of Chicago, I am delighted by the amount of organizations in the Midwest that are environmentally focused. I currently work as Policy Specialist at one of these organizations: Friends of the Chicago River. This blog allows me to explore environmental concerns and topics of my new home in Chicago, as I see them from a West Coast perspective. View all posts by chelseyinchicago